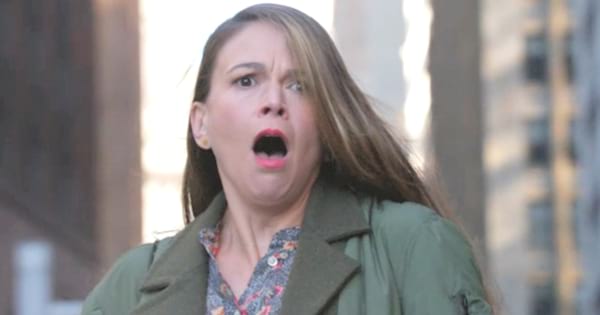 1. The One With The Fugitive

After the date, he was driving me home, did a stupid, illegal move, and got pulled over. He decided to run from the police (with me in the car). He tried to pull into a driveway and hide, but they found us. Aaaanyway, they put us both in handcuffs while they searched the car. They ended up giving me a ride home, and took him to jail. Apparently it was a stolen car. I never saw him again, as he was extradited to another state for outstanding warrants. So that was exciting. – Bewarethewulf

2. The One Kiiiind Of Out of A Rom Com

I went on a Tinder date in January that went poorly. At the end he tried to kiss me so I dodged, tripped over a curb, and broke my fibula while falling into traffic. The guy got down in the road with me, moved my hair behind me ear and said “we could tell people that we fell in love”. – mypoorbrain

3. The One With The Guy Who Had Poor Taste In Music And Dinner Topics

The first guy I ever met online took me to Olive Garden, wouldn’t look me in the eye the entire date, and talked about how his favorite band in the world was Dave Matthews Band. He spent most of the date, however, telling me about his “whore ex-girlfriend” who he walked in on having sex with another dude in their bed. – meowdryhepurrrn

4. When Her Date Got All Clepto

He decided he wanted to go to the thrift store rather than for coffee as originally planned. Sure, I like thrift stores, why not? The moment we got in the door, he headed straight over to the housewares section, stole a whiskey flask off the shelf, and stuck it in his pocket with a grin and a wink. After this, he invited me back to his place with obvious high hopes. I made some lame excuse about having to do laundry, got out of there speedily, and spent the rest of the day wondering what the hell just happened. – theregoesthelight

5. The Man Ready For The Apocalypse

This was by far the most terrifying/hilarious date I had ever been on. Years ago, when I was a junior in high school. He was in college. We had been texting casually for a few weeks. One weekend, he met my friend and I at a local concert. When it was over, the friend I got a ride from had to leave urgently. He offered to drive me home. No big deal I guess, I needed a ride. We went to dinner and it was very nice. Nothing weird nothing suspicious. Then the ride home… My house was about 45 minutes away through isolated freeways in the desert. (Accepting a ride was not my proudest moment, I admit) He talked the entire ride and it went from normal small talk to him saying that he has super powers…. He said that when he was in high school he went to an alternate dimension and couldn’t find his way back. The only way for him to find his way was to sell his soul to a merchant he found in this other dimension. When he got back to this dimension he had super powers and could control people’s emotions. He then creepily leaned over and said “I can make you feel anything right now…” He also said he knew the four horsemen of the apocalypse and that he was going to help me during the end of the world. At this point I was convinced I was going to end up in a garbage bag on the side of the road. Got home safe. Never talked to him again until he was my server at a restaurant years later and was extremely awkward. – AlmaLlama6

It was with a guy I worked with. He picked me up from my desk dressed up like Michael Jackson, including tape round his fingers and a surgical mask on his face. He was a plump, 5’6″ white guy with blond hair so somehow even weirder that he was trying to look like Michael Jackson. – ConnieC60

The worst date I ever had was my first tinder/blind date! I said hello with inside joke we shared via text. He didn’t pick up on it. Awkward, but okay, we began our wandering coffee date. Within five minutes he drops in a half-joking request to “Netflix and Chill.” I don’t mind jokes but this was said in the creepiest way ever. For the following two hours he won’t stop talking about himself. Chalked this up to nerves so I give him benefit of the doubt. That is, until he states the following about himself: (a) That he’s the son of a millionaire. (b) He’s an Ivy-league drop out. (c) He’s a former model. With him being so engrossed about himself, I barely got in a word. Towards the end of the date I actually gave him an “in a nutshell” summary about myself since he never gave me a chance. Talks of my history was met with a sarcastic “that’s very humble of you.” Oh really? Sorry for coming across as a show-off, my dear million-dollar-drop-out. What really did it for me was when he came across one of his friends on the street. His friend greeted him and asked when they could hang out. “Well, I’ll be done with this in thirty minutes.” REALLY? Nah, bro, you’re done with this date now.

This one guy complained about how he resented that nobody would let him talk to them about the dark side of life, including violence. I mentioned that I have a hard time watching violence against animals on tv. (I meant reality TV shows that have stories of animals which have been abused.) His face perked up, and he asked which TV show had violence against animals. There was an eagerness in how he asked which creeped me the fuck out. I left quickly. He tried to add me on social media later, but I blocked him. – BlueBerryJazz

9. The Guy With Daddy Issues

I met a guy in college through a friend and thought he was funny so I agreed to go on a date. I told him we would meet at a local bookstore because I don’t like people knowing where I live at first. First off, he’s fifteen minutes late and gives me no heads up. He spent the whole date trying to hug me/hold my hand/be close to me. I told him I don’t like that…he told me “you’ll get used to it.” He would ask me questions about myself, my job, my major etc. But when I would go to answer him, he would literally talk right over me about his own life. He then asked me to play some of my favorite music. His reaction to every song? “This is awful! Why do you like this?!” Okay. If you think it can’t get worse – wrong. His dad called him toward the end and they get into a ten minute fight. I told him I had to go because it was getting late (at 8:30) and he asked if I was free the next day. NOPE. –ylimeaq