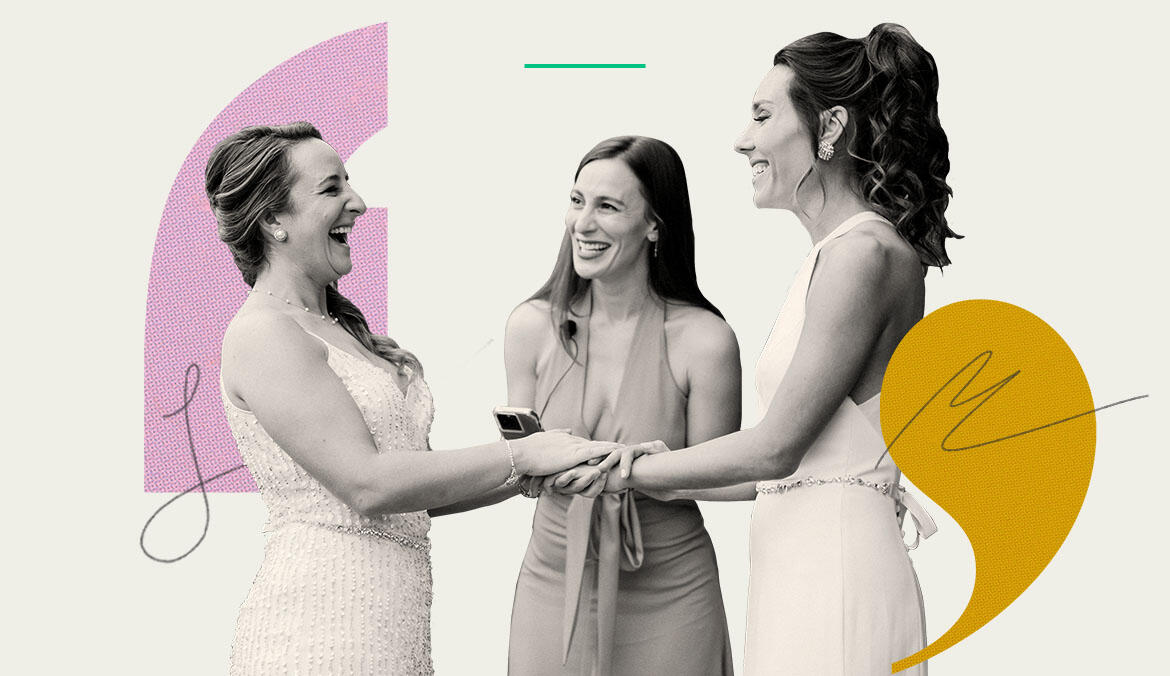 I’m Claire Wasserman, the co-founder of Ladies Get Paid, an educational platform and global community focused on helping folks who identify as women level up in their lives, particularly in the realms of work and money. (I’m also the author of a book of the same name.) In the process of creating this company, I met my now wife, Ashley Louise, who is co-founder and CEO. But, when we met, I was married to a man and didn’t identify as queer.

In honor of Pride month, Ashley chatted about coming to terms with my sexuality—both individually and as a couple—the loss of “straight” privilege I felt when leaving my husband, and what it was like for Ashley to take the plunge with someone who was in such a precarious place in her own identity journey. We discussed the power of exposure and that no matter how self-aware you think you are, ultimately you don’t know what you don’t know. And, crucially, we reflected on how amazing and powerful being in a relationship with and marriage to another woman is.

Claire Wasserman: To start at the beginning, let’s talk about the formation of Ladies Get Paid: In 2016, I was frustrated and angry about the gender wage gap and leadership gap and the investment gap—and a lack of awareness about what I could personally do to combat issues so systemic. My thinking was, Well, let’s start by talking about it. So, I began to host town halls for women to talk about money.

I quickly realized that I wasn’t alone in my frustration, and negotiating our salaries and investing our money was a great starting point for change. With career and money coaches, I hosted workshops to get woman-identifying people moving up in their lives.

I also created a Slack group—and then you came, Ashley. What made you join the community, and what was your first impression of me? Did you know I was queer?

Ashley Louise: I’d been working in tech for most of my career, and I found out that the man who used to do my job made a lot more money than I did. There was also no growth room anymore, and I wanted to do something different—something more mission driven. A friend sent me a link about Ladies Get Paid, and I was just like, Yeah, that sounds like my thing. I was thinking about looking for a new job and I was looking for a girlfriend. So, I figured it would be a great place for me to poke around for both.

I had a really profound experience at my first Ladies Get Paid event, which was focused on imposter syndrome. It was the first time I ever had been in a room with other women who were struggling with the same things as I was. I met you for the first time there, though we had emailed prior in an incredibly “on brand” kind of way: When you saw my work email when I signed up, you messaged me asking me for money.

Okay, now for the coming out story: I had been married to a man at the time for about a year, and I had also recently turned 30. At the time, I would have identified as self-aware, which is sort of funny to think back on now. You taught me this great expression: “You don’t know what you don’t know.” So I think I was self-aware, but only to a certain extent. I never had a lot of female friends; I also always had a boyfriend, but it was always long-distance. In retrospect, these relationships kind of functioned as a safety net, or maybe even a crutch, where I didn’t have to explore who I really was.

I was also super career-focused, but being immersed in a community of women with Ladies Get Paid changed things. It was after the 2016 presidential election, so there was a lot of strong feminine energy swirling—a lot of upheaval. And so I began to question my sexuality. Ashley, as an out and proud lesbian, what was it like for you to watch me grapple with this stuff?

AL: At that first event, you were moderating the panel and I remember first looking to see if you were wearing a ring. Soon after, we became friends. I remember that we would hang out at these cafés and bars, along with our other friend, trying to figure our shit out. I remember you saying that you always thought women were beautiful.

I think queer culture has disseminated very quickly in the past handful of years. My first job out of college was organizing for the Human Rights Campaign, which is the nation’s largest gay, lesbian, trans, and queer civil rights group. We were so startled at how quickly, for example, a lot of the dominoes fell around marriage equality—we were expecting that to take another 10 years.

Such progress has also changed people’s exposure to queer culture. For example, a lot of people would say they had no idea that teen bullying of queer kids is such a huge problem until having seen it on Glee or Modern Family. For many people, those two shows were the first examples of exposure to queer people without actively seeking queer content. Though corporate Pride is often now performative, it was really meaningful at the time for exposure.

And so, again, I think there were lot of people, like you, who just had no exposure to it. Back to the whole “you don’t know what you don’t know” saying, you just didn’t have anything that made you feel drawn to another woman. And then with Ladies Get Paid, spending so much time with women and having that experience of that energy changed things.

CW: To be clear—you’re going to laugh—I did musical theater my whole life, so I definitely had exposure to gay culture, but specifically male gay culture. I did not know any out lesbians at all. And if you don’t have exposure to something, then it really limits your world, and what you think is possible for you and what you think you’re deserving of. Meeting you and getting to know other lesbians and people who identify as queer showed me that there are other ways to be in this world. I knew I was attracted to you, for sure. But I wouldn’t have labeled it that way at the time. I just had butterflies in my stomach.

AL: I think there was a point when we both knew that we were going to be very important in each other’s lives, and we just didn’t know what that was going to look like.

CW: I should back up and be clear that we decided to work together well before I realized or could articulate that I had feelings for you.

AL: Yeah, we were doing some kind of courtship dance of not knowing exactly what the endpoint was, but we were, I think, both aware that we were building a very important relationship between the two of us.

CW: Then, my husband suggested that we have an open marriage, and while that’s a great framework for some people, for me, it felt like evidence that something wasn’t right in my marriage. And I did feel attracted to women—I felt like that was something I should explore. But what quickly happened was you and I got together, and as hard and horrible as it is to break up a marriage or to break somebody’s heart, it was easy to be with you. I never questioned if I was making the right decision. And for that, I’m very, very grateful, for your patience and your faith, because I was not an easy person to be tangled up with.

I was scared you were going to just kinda roll into town for a little vacation at “Lez Pond” and then be like, “never mind” and roll back on out, because it happens a lot. So I’m like, Okay, this is an infant lesbian. What are we doing here? You took a lot of time to unpack the things that you thought about queerness and the spectrum. Like you and I fall in very different parts of the spectrum, but we’re still on the same side. I’m all the way at the end of the Kinsey scale and you’re closer to the middle. But that doesn’t mean that you are not a person who’s like, “Yeah, women are my jam.”

CW: I did feel pressure to put a label on it. It was, are you gay? Are you straight? Are you bi? Queer? But if I say I’m queer, am I not a lesbian? And what are the implications of that—between me and myself, between me and you, and then society at large.

AL: And the meaning of those words continue to evolve. It’s good that we keep progressing and learning more and being more inclusive to all people. Progress is progress.

CW: I’d take it one step further and say that progress is process—just trying to figure this stuff out while being as gracious as possible to yourself. I had a lot of feelings of guilt, like, how could I have not known sooner? How could I not have been more vocally supportive of the gay community? I also grappled with, what you called, the loss of “straight privilege.”

My ex-husband is this 6’4” white man, and you’re 5’0” and I’m only 5’3”, and that doesn’t make me feel as safe as we’re walking down the street. Even in thinking about where to go on vacation, I remember you telling me horror stories about a place you went that was super homophobic. Also the thought of having kids—we can’t just snap our fingers and get pregnant. That’s actually been what I’ve found most difficult to grapple with since the end of my hetero relationship.

We got married in January, and we hope to start a family soon, and we have conversations that I never expected to have growing up. This wasn’t part of the calculus, but there’s also a lot of beautiful. I mean, I love that we can be so intentional about this.

AL: Yes, but we also don’t have to find a silver lining—it is a sad thing, objectively. No child we have, whether it’s your genes or mine, will be our child. It’s not an issue of, “you’re not my blood,” but it’s more that we’d have like a really cool kid. To me, the world is lesser because of it.

CW: Let’s wrap with discussing our favorite parts of being with another woman. Or pieces of advice, words of wisdom, things that you’ve learned in this whole process of my coming out that you might want to share.

I just love women, and that’s it. I always have, I always will. I’m a hyper-emotional person. I cry all the time, am very in touch with my feelings, and not to stereotype genders. I just like vibe with women better and sharing closets is also really cool. Twice as many clothes.

CW: I think I’m wearing your shirt right now. Being emotionally intimate can be very intense and exhausting, but ultimately it means that we feel totally alive and in sync, and that feels really f**king good.

AL: Yeah. I highly encourage everyone to give it a try this Pride month.

CW: We welcome you with open arms.