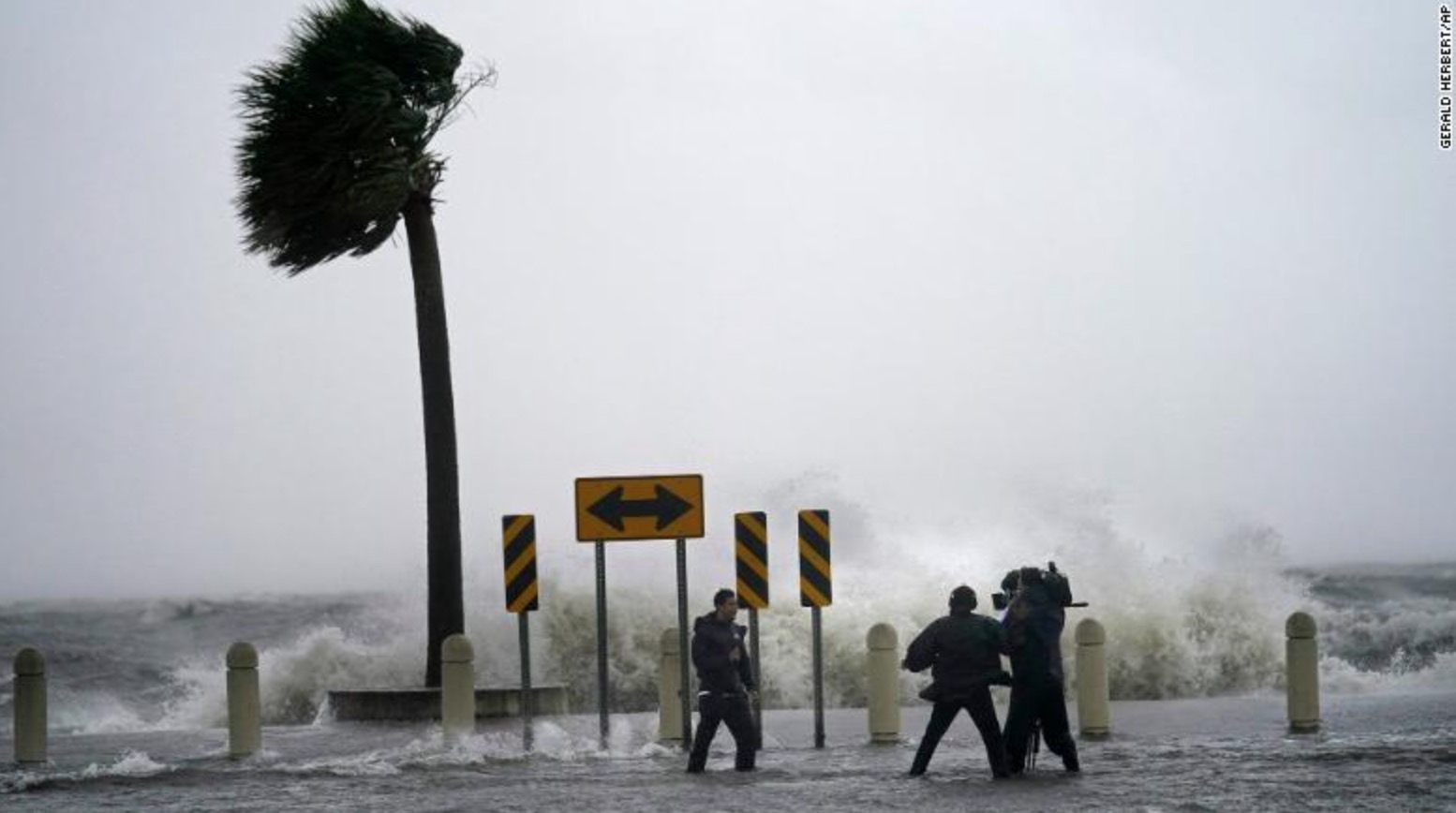 (CNN)It suddenly feels like 2005 all over again.A monster hurricane is pounding New Orleans. Americans are mourning US combat deaths in a post 9/11 war. And a President is under siege.Sixteen years ago was a grim period when insurgents turned the Iraq war against the US and Hurricane Katrina left people dying in the streets of the Big Easy, becoming a metaphor for the US presidency in free fall. President George W. Bush never regained his authority or political clout after being a bystander to those twin disasters in ’05 — a now infamous photo of him gazing out the window of Air Force One at Gulf Coast storm devastation appeared to symbolize his administration’s detachment from the crisis.

“Is this President ____’s Katrina?” Beltway pundits now quip during every political crisis. 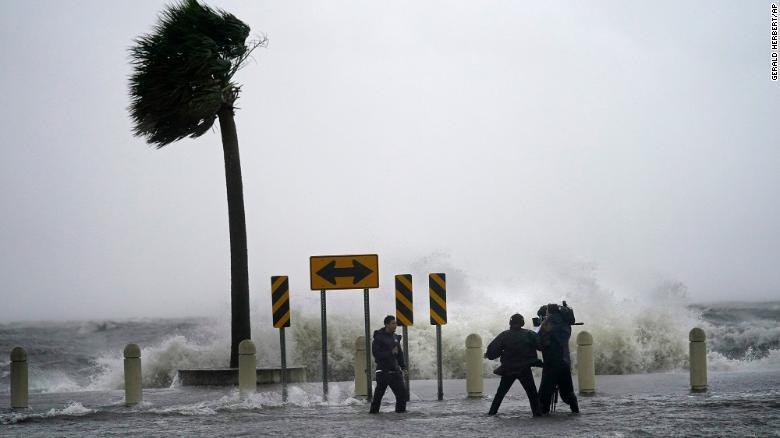 A news crew reports on the edge of Lake Pontchartrain ahead of approaching Hurricane Ida in New Orleans, Sunday, Aug. 29, 2021.Successful presidents bounce back after political cataclysms. Both Bill Clinton and Barack Obama overcame crises and won second terms. Jimmy Carter and Donald Trump became defined by their faults and fell short. (Bush was lucky that his horrible patch came after he won a second term). So the next few weeks will be critical for President Joe Biden’s standing.

The deaths of 13 US service personnel along with at least 170 others in last week’s suicide bombing in Kabul was a humanitarian tragedy and a political nightmare for the President. His hopes of being able to boast about ending America’s longest war are now tainted by botched execution of the withdrawal. While his defenders claim Biden is unfairly being blamed for two decades of war errors, he did add another layer of failure on to

Hopefully, Hurricane Ida will wreak less destruction than Katrina, which hit exactly 16 years ago Sunday. But even if it blows over and the US gets out of Kabul by Tuesday’s deadline with no more carnage, Biden will still be in the eye of a political storm. A new scientific model suggests another 100,000 Covid-19 deaths by December. It’s not Biden’s fault so many Republican voters refused to get vaccinated. But he is the President, and he was elected to end the pandemic. His declaration on July Fourth that the worst of the Covid-19 nightmare was over now appears just as injudicious as his pledge that there would be a safe and deliberate pullout from Afghanistan. 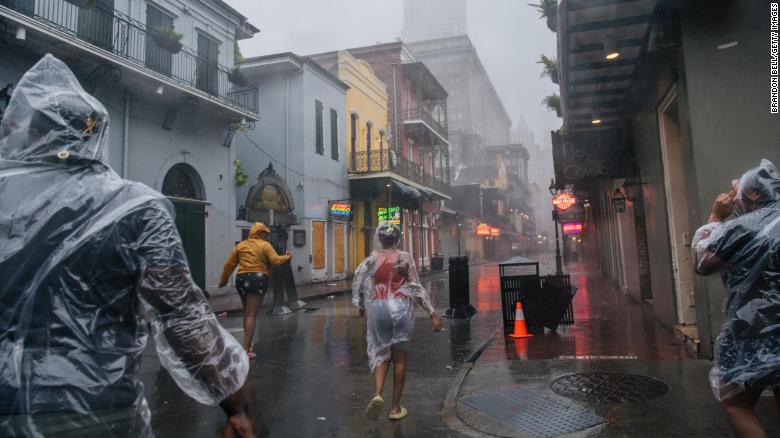 A group of people walk through the French District during Hurricane Ida on August 29, 2021 in New Orleans, Louisiana.Looking back at CNN reports on Hurricane Katrina from exactly 16 years ago, the headlines are eerily suitable today: “New Orleans braces for monster hurricane;” “New Orleans pleads with final holdouts to leave; no forced evacuations yet,” writes Meanwhile’s Shelby Rose from Jackson, Mississippi, where she evacuated after leaving New Orleans, where she attends Tulane Law School, ahead of Hurricane Ida.Ida slammed into southern Louisiana this weekend with winds of 150 mph, rekindling memories of the fear and last minute panic of the previous storm. The New Orleans Airport has grounded all flights. Power is out all over the city. And city police are reminding everyone that their ability to respond to emergencies will be “extremely limited during this weather event.”In New Orleans, the weather began to worsen on Sunday afternoon. Blaze D’Amico, a fellow student at Tulane Law School, watched one wall of her house start to come apart under high winds in the suburb of Metairie. “Someone looked over at one of the walls, where a massive crack had formed in the sheetrock. Within moments, the crack spread out in multiple directions and the whole wall started bulging,” she said. “Now the wind is whistling through the holes in the wall.” 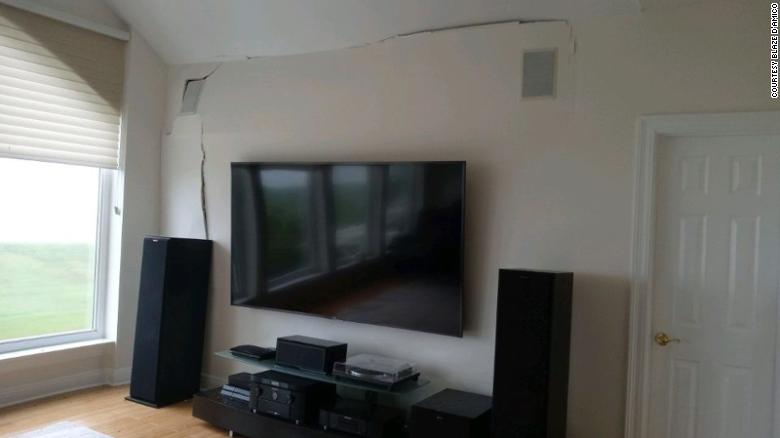 A wall cracked from high winds in Metairie, Louisiana.As the storm edges toward the Big Easy, the memory of Katrina is acute. But not everyone is taking it quite as seriously. Stuart Cranner, a New Orleans native, evacuated during Katrina but decided this time to wait out Ida at his family home in Mandeville, Louisiana. Ida “feels safer because the city seems more prepared,” Cranner said in a text message to Meanwhile, adding that he had decided to stay there to take care of the house.

It’s true that since Katrina, the levee and water control systems in New Orleans have been improved, pumps have been upgraded with backup generators and gates have been added at key canals to help block water from entering the city during storm surge. Ida’s storm surge is also expected to be smaller than Katrina’s, estimated at 12-16 feet according to the National Hurricane Center, compared to 24-28 feet in 2005.But Ida is still undoubtedly dangerous — and it comes at a moment when Louisiana’s health system is already in crisis, with hospitals overflowing with hundreds of Covid-19 patients. Uncertainty about the damage to come is what drove many people, including myself, out of the city; we don’t know how bad it will get, but no one wants to risk a replay of 2005.