Do bisexual people really sit weird? Well, according to the internet, it’s a resounding yes. Since 2017, it’s been a running joke in the bisexual community that bi people can’t sit properly to save their lives. But why is the bi sitting stereotype even a thing? And where did it even come from?

Grab a chair and get comfortable because we’re about to take a deep dive into the bisexual sitting meme.

What Do They Mean By ‘Bisexual People Sit Weird’?

If you’re not online much, the stereotype that bisexual people sit weird may be a little confusing to you. After all, it is an oddly specific trope that doesn’t seem to have any connection to bisexuality, which is defined as an attraction to people of the same and opposite gender.

The stereotype posits that bisexual people, for whatever reason, don’t know how to sit in chairs properly. They’ll drape one leg over the arm of a chair, sit half off a chair with their legs up, or cross their legs with one leg under the other – basically they’ll do anything but sit upright with their backs flush against the back of their chair.

The Origin Of The ‘Bisexual Sitting Disorder’ Meme

The exact origins of this meme are unknown, but one theory states that, because bisexuals aren’t straight, they’re incapable of doing anything straight – including sitting in a chair.

Some internet users attribute the meme to Twitter user @eIektranatchi, who was one of the first people to write “bi culture is not sitting properly” in 2017. Since then, the meme took off and has been rehashed online with various first-person accounts of sitting strangely.

In the r/bisexual subreddit, a user shared on a screenshot of a tweet by user @TurboBurpo that says: “Nothing ever felt more validating than when I first saw the tweet that said ‘bisexual people can’t sit right’ while I was sitting half off a chair with my legs up on my couch and my chin pushed into my chest”. The replies to the thread are a treasure trove of personal accounts of just how relatable the meme is:

“I spend half my time just trying to sit better and finding that whatever way I found was worse,” replied user MadethisforGrillerz.

“The bisexual creed – ‘Our puns are as bad as our posture,’” said Spartan2170, referencing another stereotype that bisexuals love making puns.

The meme became so popular among the bisexual community that one dad even built a special “bi-chair” for his bisexual daughter. The idea of a bi-chair first came to light when a Brazilian artist named Má Matiazi posted a rough sketch of their design on Instagram on July 26, 2019 with the caption “designed for people who can’t sit straight.”

Starbucks barista and Air Force vet Israel Walker saw the design, spoke with Matiazi, and gained their blessing to build the bi-chair for his daughter who identifies as bi and non-binary.

Using Humor As A Coping Mechanism: A Bisexual Trait

The bisexual sitting in chairs meme is just one of many outlandish bisexual memes and stereotypes that can’t really be quantified. Just like the gay Babadook meme, the stereotype that bisexuals always wear cuffed jeans and nose rings, and the idea that doing finger guns makes you bi, the bisexual sitting meme is an example of how marginalized and frequently erased communities find solace in humor.

These inane jokes can be viewed as being rooted in the idea that bisexuals are relagated to the status of “mythical creatures” due to the amount of bi erasure and double discrimination they experience in both straight and LGBTQ spaces.

Indeed, bisexual people are often subjected to negative stereotypes such as:

Because of all these stereotypes and the resulting discrimination, bisexual people have been found to feel “less satisfied, worthwhile, and happy” than everyone else and are 80% more likely to suffer from anxiety than the average person.

According to research done by the National Center for Health Statistics, bisexual women have also been found to have more trouble falling and staying asleep than their straight, gay, and lesbian counterparts.

The “bisexuals can’t sit straight” meme may be a hilarious and totally harmless stereotype that might have a kernel of truth to it, but it stems from a deeper issue that affects the community. In battling with the negative stereotypes and discrimination they face from both straight people and the LGBTQ community, bisexual people use humor as a coping mechanism. 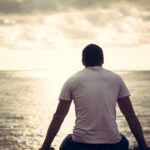 I don’t know if I’m a bottom, and I’m embarrassed