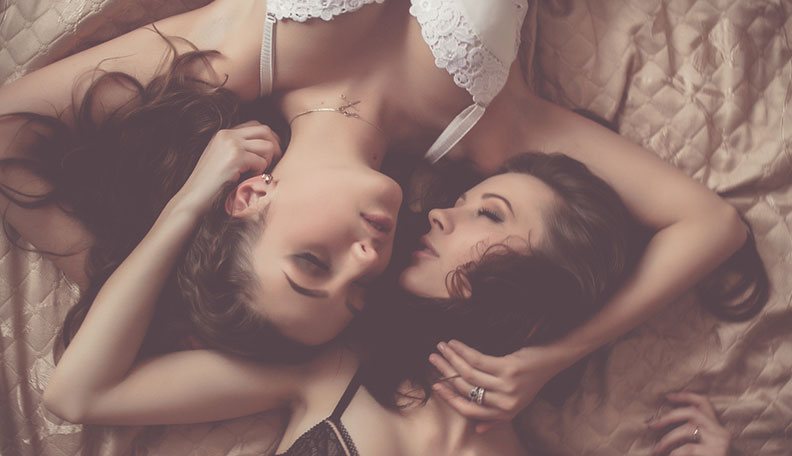 You’re straight, so why do you have a lesbian fantasy? Truthfully, many women do and it doesn’t always mean that you’re a lesbian. So, what does it mean?

The human brain is a complicated thing. In fact, we don’t even know everything about it yet! So, it’s no surprise that desire, attraction, and what makes you feel turned on can be just as complicated. It can also be confusing, especially if, as a straight woman, you have a lesbian fantasy and you’re not sure what it means.

For some women, having a fantasy such as this can cause a huge amount of confusion because they worry that it automatically makes them a lesbian.

For sure, some women may be and don’t know it yet, but it’s actually one of the most common fantasies to have. That means it’s perfectly normal to have fantasies about other women and be straight.

The truth is that although everybody is different and likes certain features, there is one thing that most women seem to agree that they like: other women.

It may seem strange that a straight woman would get turned on by other women, but the facts don’t lie. It doesn’t mean you actually want to act out your desires in real life, it’s just a playful idea in your mind that helps you get off!

We all have unique fantasies

Having a sexual fantasy isn’t something that’s unknown or unique. Everybody has something they imagine that gets them all worked up and turned on.

The truth is that nearly everybody has a fantasy that only they know about, but that doesn’t mean this fantasy says anything crucial about their mind. Some people have weird and wonderful fantasies that they keep to themselves for life, others like to share them.

Not all fantasies have a profound meaning behind them. Sometimes you have a fantasy just because you made something up in your head that made you happy or turned you on. Sometimes, however, our fantasies can reveal things about ourselves that we don’t yet realize.

For instance, some of the most common sexual fantasies include:

2. Being dominated or dominating someone else

3. Being caught or doing it somewhere with a high risk of being caught

7. Cosplay and role play, i.e. dressing up as a fantasy character and assuming their identity

8. Being swept off your feet in a romantic sexual setting

If your fantasy isn’t on the list, that doesn’t make you abnormal or strange. It just means that you have your own unique fantasy that you like to indulge in. Nothing strange about that!

Believe it or not, if you identify as being straight, but you have sexual fantasies involving other women, you’re not alone. There’s a surprising number of straight women who feel just like you do. It’s usually not even anything to even concern yourself with. It’s just a fantasy!

If you’ve noticed lately that you’re gravitating toward girl-on-girl action when getting in the mood, you may want to know what it all means.

So, here’s the lowdown on having a lesbian fantasy as a straight woman.

1. It probably doesn’t mean anything significant at all

To be quite honest with you, having lesbian fantasies probably means literally nothing. You could just be having them because it’s what gets you going without having any other significant meaning behind it at all.

You may never want to act it out in real life, or maybe you think you would but when it comes to it, you change your mind.

This is something that not a lot of people are familiar with. But, it can explain a whole lot of different things going on in your mind. First, sexual fluidity is when your preference over men and women fluctuates.

So at one point in your life, you could primarily like men. But, at another point, you may start to become more attracted to women. If a lesbian fantasy is new to you, this could be the reason why.

3. You admire other women

Let’s be real here, women are amazing. They’re beautiful, powerful, and elegant. These are all things men are not, and they’re also very coveted traits to admire in someone else.

It only makes sense that you admire other women for all of these. It’s also understandable that these are the traits that would turn you on. It may just mean that you just think other women are amazing and that idea gets you hot.

This is usually what comes to mind when you realize that you’ve started having a lesbian fantasy. However, it isn’t always true. If this is the case, however, you’re going to be thinking about whether or not you’re completely straight an awful lot.

If you have doubts that you’re really straight, you may start fantasizing about a relationship with women and not just the sexual aspect of it. When your fantasies shift from sexual to romantic, you may fall under this category.

5. You desire the presence of more women in your life

Some ladies aren’t blessed with having a lot of female friends. Sometimes we manifest this desire to have other women around by fantasizing about them in a sexual way.

The fact of the matter is that women need other women. We’re too unlike men to be surrounded by them all the time. All your lesbian fantasy could be telling you is that you need to start spending more time with girls as opposed to guys. So go out there and get yourself some new female friends!

6. You want to try something different

If you’ve been fantasizing about anything other than your current partner, it’s obvious that you want something new and different in your sex life. Fantasizing about women just so happens to be something MUCH different than what you’re currently doing.

Instead of thinking this means you want to be with women, just try switching things up in your sex life. Expressing your fantasies to your lover can also help you find out just what it is you find arousing about girl-on-girl action.

You may think that since you’ve been with guys, it would be easier to imagine having sex with them. But it’s actually easier for us ladies to think of girls pleasing girls. Why? Because women know what women want.

If you find yourself gravitating toward women getting frisky with other women, it might only just be because it’s easier for your mind to conjure up, versus fantasizing about some male getting it on with another woman.

This is more of a subconscious thing that may be happening without you even realizing it. Some girls are more susceptible to gender roles than others, and this may be why you enjoy thinking about girls with girls instead of a straight fantasy.

Most fantasies are a straight play on gender roles significantly. If you’re someone who doesn’t like them, having a lesbian fantasy removes those roles completely and allows your mind to imagine sex in a neutral way.

You may not agree, but most think that there are far more beautiful women that walk this earth than there are attractive men. Girls are very attractive, and even as a straight woman, you’d rather fantasize about someone attractive, regardless of their gender.

Having a lesbian fantasy can be nothing more than you admiring an attractive woman’s body. There are more succulent curves, softness that men don’t have, and a nurturing feature that you may be drawn to.

10. You’re curious about the experience

Maybe you’re just curious. Maybe the allure of being with a woman who knows exactly what would feel good to you is clouding your mind and filling it with fantasies.

Having a lesbian fantasy may just mean that you want to give some girl-on-girl action a try.

If it’s turning you on in your imagination, and you think it would still turn you on in person, this could be what those fantasies mean.

Shoud you tell your partner about your lesbian fantasy?

We’re often told that to spice up an ailing sex life, we should share our fantasies. So, should you share your lesbian fantasy? That’s up to you.

If you’re sure that it’s nothing more than a fun thing you think about to get turned on, why not share it with your partner?

You don’t have to act out a fantasy by sharing it. Instead, you can simply use it as a catalyst to spice up your sex life when perhaps it’s dipped into a rut. But, at the end of the day, it’s your fantasy and you decide whether you want to share it or not.

What if a lesbian fantasy does mean you may be a lesbian?

If you’re regularly using a lesbian fantasy to get off and you start to think about women in romantic situations and not just sexual, it could be mean that you might want to start exploring your sexuality a little more.

Maybe you’re bisexual, or perhaps you really are a lesbian and you’re only just started to think about it seriously.

It’s nothing to worry about and surely nothing to panic about. It’s something for you to explore and think about on your own. Then, when you want to explore a little more, perhaps by trying experiences with other women, you could give it a try at your own pace.

It’s true that lesbian fantasies often don’t mean that a straight woman is a lesbian, but in some cases, it can. It can be the first inkling that the straight life isn’t for you.

By exploring that idea and finding out a little more, you will get your answers. Then, if it turns out that you are a lesbian or bisexual, you’re free to start living your life in a way that isn’t just a fantasy.

Just because you’re having a lesbian fantasy doesn’t mean you’re actually a lesbian. It can actually mean a number of different things that are completely innocent.

Source: The Lesbian Fantasy & What It Means to Have One As a Straight Woman

June 21, 2022
3 Signs That Are Totally Compatible With Libras