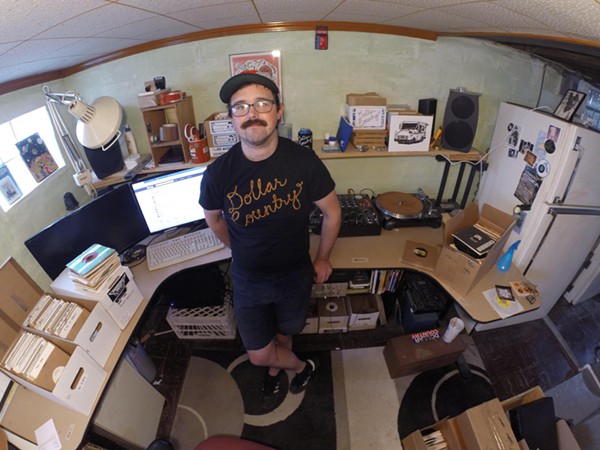 From a makeshift studio in his suburban Cleveland basement filled with a collection of 1,500 .45 RPM vinyl records, Franklin Fantini — a self-made, DIY purveyor of ten-cent wax — has for the last five years been broadcasting Dollar Country WTFC every week.

The hour-long online radio show hosted by Frank — Frank the Drifter, as he introduces himself — features a curated tracklist of 18 songs handpicked from his shelves. Most of Fantini’s selections are obscure country recordings by unknown artists released by now-defunct labels, and his listeners range from fellow collectors to reformed metalheads and punks who now embrace the country genre in adulthood.

The name Dollar Country comes from Fantini’s time working at Love Garden Sounds, a record store in his hometown of Lawrence, Kansas, where he spent hours watching customers pick over the bargain offerings.

“I just saw people going through the dollar bin of .45s, and I always thought that seemed really stupid,” Fantini says. “But then, after a while, I would find these weird country things. I found this one song that was called ‘I’m Tired of Going Home Drunk, So I’m Just Gonna Stop Going Home,’ or whatever, and I was like, ‘Wow, this stuff is funny.’”

Fantini credits his uncle, Richard McGuire, who ran a pirate radio station (WTFC) under the alias of Carl Stromberg in the Delmarva area years ago, with his interest in the airwaves.

“He worked at legitimate stations around the East Coast all his life, but he’d go on-air at least once a year in his backyard for 40 years,” Fantini adds. “He’s the reason [radio] has always been something I’ve liked.”

After watching his uncle grow a cult following, Fantini went to the University of Kansas and worked at the campus radio station, KJHK, where he fortified his loose, welcoming disc jockey persona reminiscent of retro, low-budget small-town stations.

Fantini is bringing country music’s focus back to Northeast Ohio, whether it’s by preserving the region’s migratory Appalachian roots by playing songs off small-time, now-defunct Cleveland labels like Carwin Country or taking Dollar Country on the road to local DJ gigs across town.

When Fantini first moved to Cleveland, he worked as a dog-walker while doing the show as a side hobby. But as Dollar Country’s support system slowly grew along with the time he needed to spend on production, he set up a Patreon to generate revenue. That’s allowed him to treat Dollar Country as a full-time job and given him the time to create a mixtape series, zines and merchandise.

“We have this idea that we are supposed to be doing something we don’t want to just to make money,” Fantini adds. “I mean, I don’t make a ton of money [doing Dollar Country], but I’m happy.”

The show is evocative of the lower middle class household sounds that once populated the Northeast Ohio and Northern Appalachian areas.

“I think it’s a big part of why people like my show and why country music is such a big deal,” Fantini says. “It’s music people just have playing on the radio. They don’t have to pay much attention, but they absorb it because it sounds good.” Fantini’s own journey with Dollar Country is highlighted by the show’s most recent mixtape, Loners & Outsiders, which is dedicated to “country artists who took their own path,” and features the likes of Lee Royal and Ozark Slim.

Like every episode, the tapes are, according to Fantini, “as far off the beaten path as I can find,” and Dollar Country relishes in its own amateurity. Fantini embellishes the genre’s DIY roots through playing records with static from aging, or leaning into a flubbed line of dialogue here and there, while masterfully pairing the nostalgia of radio’s heyday with the benefits of the digital era he’s working in. Each episode is available on Apple Podcasts and, before playing the final track every week, Fantini urges his listeners to practice kindness, evocative of outlaw country’s early, near-forgotten roots of inclusivity and revolt against authority and hatred.

Fantini’s following is now more intercontinental, diverse, and dedicated than ever, evident in two leather slipmats with the Dollar Country logo embossed on them that sit on his two turntables, which were custom-made for the show by a fan in Australia.

Five years in and Dollar Country is still, mostly, a one-man operation. Fantini now works with a manufacturer to produce physical copies of his mixtape cassettes and compilation CDs due to their increased demand, but, for each recording session, he sequences every song and spends hours at his desk doing research on the labels that released them.

“Despite what pop country is, country is still a DIY genre and the buy-in is pretty cheap,” Fantini says. When he started collecting country music rarities, it was because the genre was not valuable enough for people to hike up prices and the finds weren’t complete trash, either. “It’s the kind of stuff that’s harder to find sometimes, because people just get rid of it,” he says. It was those rarities that initially helped Fantini place himself within a community ready to uncover the lost mythologies of a genre fighting tooth and nail to be preserved. But now, 150 shows in and counting, his Frank the Drifter persona has emerged as the community’s cardinal caller. 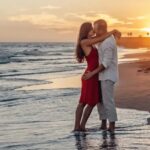